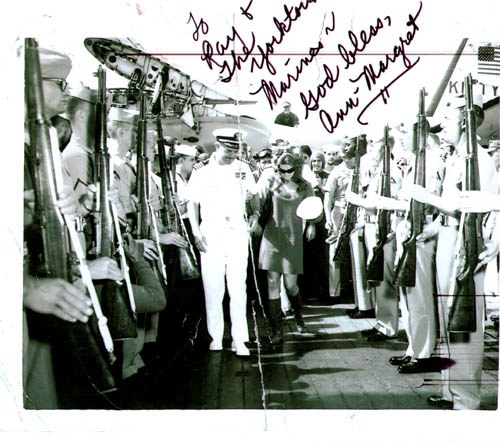 On April 7th this year I went to see Ann Margret in concert in Fort Collins, CO. I took with me an enlargement of a picture taken aboard the USS Yorktown CVS-10 of her comming aboard and going through the Marine Corps Honor Guard. I am the third Marine (Lcpl) on the left. I also was one of four Marines that escorted her up to the stage (forward elevator that was lowered to make the stage)

After the concert I went to the stage and asked the keyboard player if he could get Ann Margret to autograph the picture. He called the road manager over and I was taken back stage. When Ann Margret came out of her dressing room she was introduced to me and we spent time talking about her time aboard the aircraft carrier. She remembered the squids spelling out "Hi Annie" with their bodies then getting the hell off the flight deck before she landed.

She then autographed my picture and I got a great big hug and kissed on both cheeks. One class act lady. More attention should be paid to her and her support of the troops instead of that self professed whore Hanoi Jane.