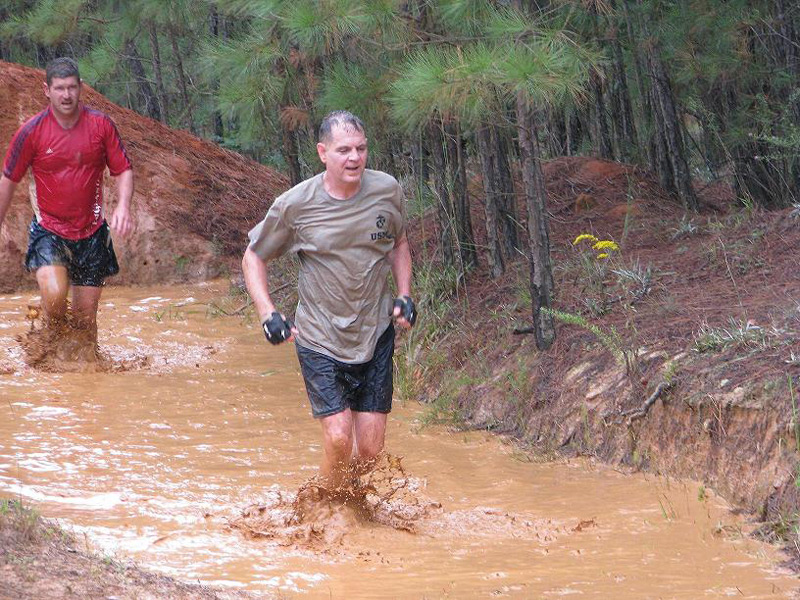 I served with our Corps from 1970-78 and was on active duty from 1970-74, the highlight being a platoon commander with 3/8 from 1971-72 and a taking part in a NATO overseas deployment where, tragically, five of our Marines were killed in a helicopter crash. In honor of the Corps I was determined to remain fit and active as best I could during my aging process and have an annual adventure (includes a 30,600 feet HALO skydive, a great white shark cage dive, flying the L-39 military jet, a trip down the Amazon River and catching a piranha, etc). Last September the adventure was taking part in the Marine Corps Mud Run with a team of "youngsters" (who I made honorary Marines for the day).

While in Columbia, SC at the Marine Corps Reserve Center doing the Marine Corps Mud Run, we helped to raise about $200,000 for the Marine Corps Foundation supporting families of Marines injured and killed in Iraq and Afghanistan. There were 1,800 4-person teams (ours was named "Fortune Favors the Brave" – the motto of 3/8) taking part. The course was 4.25 miles long and included 30 obstacles–from jumping up and over 5 foot concrete ledges, muddy hill climbs, rope swings over mud pits, climbing a 10 foot wall, a combat cargo net climb, 25 feet up-and-over ladder obstacles, climbing over logs in the water, crawling through water pits with netting 6 inches above our heads, a 25 yard swim through a 14 feet deep mud pit, log walks over mud pits, multiple mud pit runs, etc. My teammates were ages 27, 17 and 15 and I kept up with them every step of the way and even led them through a number of the obstacles.

I ended up with multiple abrasions and bruises on both legs and even fell 5 feet off the combat cargo net onto my back (just knocked the wind out of me for a minute fortunately) and I had to live on Tylenol for several days, but it was great fun and made money for a terrific cause. I may be 61 but the Marine Corps tells me that "pain is just weakness leaving your body" so I am (must be) pretty darn strong. I just wish it didn't hurt so much

Most people know me well enough by now that they know just how much an impact the Marine Corps had on my life. Eleanor Roosevelt once said that we should all, "Do one thing every day that scares you." The Mud Run was that one thing for 2009. I also love the quote by an anonymous person who said that, "Life is an incredible adventure or it is nothing at all." That's the way I've tried to live my life and hope never to have to give up on that. We'll be back again to do it September 25, and flying the CH-46 helicopter is on that list for 2010, too.