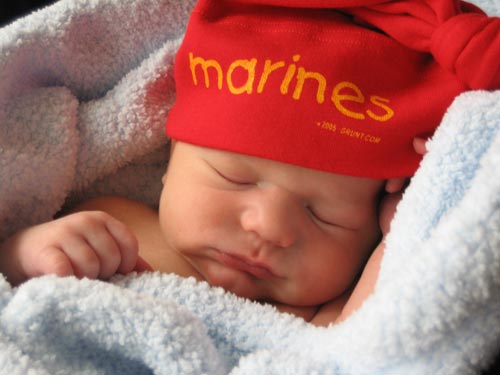 I'm a Former Marine Sergeant who served from 1980-1986. I went to Parris Island in September of 1980 as a member of Platoon 2087. First stationed at Camp Lejeune as a Field Artilleryman in Alpha 1/10 and later HQ 1/10. From there, I ended up on Embassy Duty where I served as a Marine Security Guard at the American Embassies in both Reykjavik, Iceland and La Paz, Bolivia. Even though that era is considered "peacetime," I lost a lot of good friends in both Beirut and Grenada.

I eventually chose to leave active duty to pursue a career in law enforcement, which has been very fulfilling. However, the statement "Once a Marine, Always a Marine" is very much true and I consider myself a Marine first even before 'State Trooper.' The longer I am out, the more proud I am of the Corps, and the more I pray for our younger Brothers and Sisters who are putting their lives on the line over in the 'Sandbox.'

I'm enclosing two photos for your web site to show our continued support of the Few, the Proud. My daughter, Ava, is two years old and is featuring the USMC hoodie. The Future Grunt, Nicholas, was born on June 30th. He was 7 lbs, 14 oz. and 21 inches long! He's sporting a gung ho cover to keep his chrome dome warm.