Detroit native, born in 1923, Cpl. Leonard B. Turner enlisted in the Marine Corps in 1942 following the example of two of his brothers who had already signed up for World War II military duty ahead of him; Bob via the Coast Guard and Bill through the Marine Corps.

Turner served under Lt. Col. Evan F. Carlson on New Caledonia; was sent to Guadalcanal, Efate, and Espiritu Santo; and was a part of the first waves during the battles of Bougainville, Guam and Okinawa. After the war was over, Turner returned to his hometown of Detroit and served in a supervisory capacity at General Motors Headquarters, retiring after 42 years.

Appearing in authentic 1945-1948 Marine Corps dress blues with his original regalia, Turner marched into the ballroom behind the traditional birthday cake as the slow version of the Marines Hymn played, during the Marine Forces Special Operations Command’s 244th Marine Corps Birthday Ball in Wilmington, N.C., Nov. 2, 2019. Turner, a 96-year-old World War II veteran and Marine Raider, affectionately nicknamed “Raider 96,” served with 2nd Marine Raider Battalion and was the oldest Marine in attendance at the ceremony. He stood proud and tall as he was announced as the oldest Marine present and generations of Marines responded, without hesitation, with a standing ovation as Turner passed a piece of birthday cake to the youngest Marine present, 19-year-old Pfc. Ivan K. Lopez.

“The experience was humbling and exhilarating,” remarked Turner. “It filled me with a sense of great honor and pride to be a part of this timed-honored tradition, allowing me to pass the torch to the youngest Marine, who in fact is actually from 2nd [Marine] Raider Battalion, as was I, over 75 years ago. It ranked high on my life’s most memorable events, along with the announcement of Japan’s surrender in World War II, my wedding day, the births of my daughter and my son, and my retirement day from General Motors.”

Every year, each Marine Corps unit comes together and hosts a Marine Corps Birthday cake cutting to celebrate one more year since the birth of their Corps. This celebration is an event that brings together Marines, old and young – enlisted and retired, and allows them to celebrate their commitment and dedication to the Marine Corps and strengthen their camaraderie and organizational esprit de corps. Throughout the ball, different Marine Corps traditions are upheld, paying homage to the organizations’ heritage.

“You can’t force heritage, it just happens,” said Master Gunnery Sgt. Otto E. Hecht, the senior enlisted leader at MARSOC’s Marine Raider Training Center. “Heritage is the result of the people, artifacts, symbols and traditions that have been provided by those that served before us. Our heritage defines who we are and shapes where we are going as Marines. [The ball is] a time of reflection on our past accomplishments combined with our newest generation of Marines and their contributions that make our future both exciting and meaningful.”

This connection between the past and present can be seen throughout many traditions during the Marine Corps ball and is the foundation of this event each year. One such tradition is the passing of birthday cake from the oldest Marine to the youngest Marine, which represents the passing of experience and knowledge from older generations to the newest generation of Marines. The birthday cake is traditionally cut with the Mameluke sword, to honor Lieutenant Presley O’Bannon’s assault of Derna, Tripoli in 1805, as a reminder that Marines are a band of warriors, committed to carrying the sword, so that the nation may live in peace.

“The ceremonial formalities along with the reading of our 13th Commandant’s message reminds us all of our Marine Corps heritage; however, the ball is not just about that,” commented MGySgt. Anthony Guisao, MARSOC’s SOF senior enlisted advisor. “Along with reminding us of our past, the ball allows us to view who we are in the present. The reading of the present Commandant of the Marine Corps’ message also provides insight as to where he envisions the Marine Corps going towards the future.”

Turner explained that his favorite experience at the ball was shaking the hands of the younger Marines. The opportunity to meet the Commandant of the Marine Corps, General David H. Berger, and his wife, Donna, who were in attendance as the Guests of Honor at the MARSOC Ball was, as Turner described it, “the icing on the cake!” He was moved by the reverence and respect shown to him by the Marines and the interest in his experience in the Marine Corps. Due to the time in our country’s history that Turner was enlisted, most of his cherished memories involved the time he spent making memories with friends, with his most cherished being when the announcement rang out that the Japanese had surrendered.

“I would say that I went into the Marines a mere teen and left an old man,” said Turner. “The Marine Raiders had defined me. They set me up for life’s battles and challenges with skills of leadership, organization, morality, steadfastness, patience and discipline- not to mention I’m still pretty good with that machete around my yard!”

The term Raider can’t be used alone. It must be preceded by “Marine” because that is what Marine Raiders are first and foremost- Marines, mentioned Hecht. The warfighting principles current Marine Raiders use in Special Operations comes from their foundation in Marine Ethos and Core Values – there is not one without the other.

“Too often people, in general, tend to identify themselves as what they do instead of who they are – Marine Raiders are no different,” remarked Guisao. “As the younger generation of Marines assimilate into the MARSOC culture, it is the senior Marine Raiders’ responsibility to continue inculcating Marine Corps values into them. ‘Marines are who we are and Special Operations is what we do’ is not just a catch phrase, it’s a constant reminder for all Marine Raiders to never forget their identities as U.S. Marines. This is also a reminder to the Marine Corps writ large that Marine Raiders have not forgotten where they came from and continue to be proud of who they are, U.S. Marines.”

When asked to share a story from his time during the war, Turner reflected on his time when assigned to 6th Marine Division. During this time, a fellow 6th Division Marine told him that they were the lucky ones. Many of their military brothers had given up their todays so that Turner and those who survived would have their tomorrows.

“This is my legacy, my story,” revealed Turner. “So, young men and women, as far as stories go, you will have to make up your own story. You have been given the chance to create a story of courage, strength, honesty, morality, leadership, and compassion that you will carry with you to your end of days.” 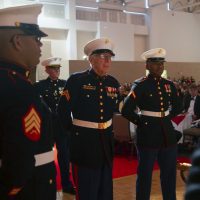 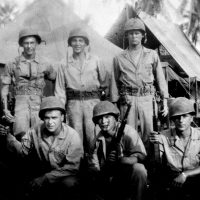