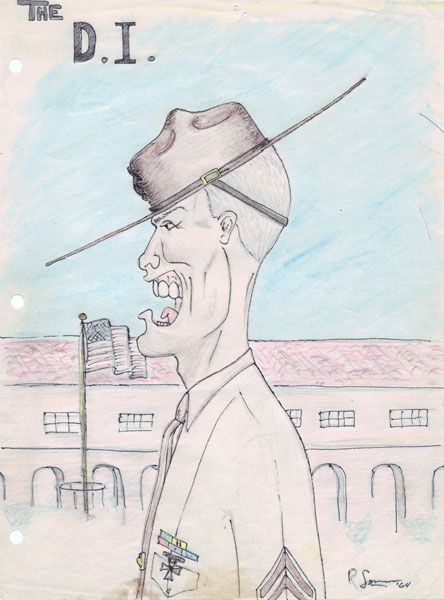 “Cpl. Stelling, if you read this, I just want you to know that you did a great job of turning the Platoon 218 “mob”, as you sometimes referred to us, into hard-charging Marines. Semper Fi, Sir!”

Here’s how my brother and I explained it in my book, EXCITEMENT! Shot At And Missed:

Ken laughed. “People who haven’t experienced Marine Corps boot camp don’t really understand what it’s like. People say, ‘Awe, you’re just exaggerating!’ or ‘It couldn’t be that bad!’ Well, you and I and every other Marine knows it is that tough!”

We remained silent for a moment more, memories flooding our minds. Then Ken continued, “But you know what, it was worth all the pain, humiliation and BS. I guess, in a way, it really was interesting and definitely life-changing. I suppose training schedules have been changed and updated over the years but the mission has not changed. Training civilians to be Marines is the goal, and the DIs do a great job. Just look at our history!”

“But, as you know, the rough, insane stuff is just a part of the entire program. The goal has always been to weed out those who don’t match up to the program. The marching, the running, the pull-ups and sit-ups, history lessons, yeah, even the crazy stuff… it all adds up to a finished product that fits the Marine Corps mold: the creation of new Marines. Yes, it truly is an interesting and life-changing experience.”

Is it really interesting? Absolutely! Life-changing? Absolutely! But, ask anyone who has passed through the hallowed sand pits of MCRD, no matter the era, whether it be at San Diego, California or Parris Island, South Carolina, if they would do it all over again, and the deafening roar would most likely be a resounding, Hell No!

At the same time, those who have experienced and overcome the rigors of ‘boot camp’ would undoubtedly also say that it was probably one of the greatest experiences of their lives. Doing things that most people can’t even contemplate doing brings about a metamorphosis that changes civilians into hard charging, Gung Ho Marines, troops who learn early on that following orders and accomplishing things that seem impossible lead to ultimate success. The Marine Corps prides itself on its hard-Corps, iron-clad, rock-hard discipline as the only way to train men to be warriors. To become a member of this exclusive group, recruits are pushed to their limit and beyond – physically, emotionally, psychologically and academically. Every recruit is goaded, pushed, harassed and cajoled to succeed. They are constantly screamed at and many times humbled into succeeding. The standards of excellence are set very high. Failure is not an option!

The Drill Instructors are tough, strict and, above all, not willing that any should fail. But some do. Why? Because everyone is not cut out to be a Marine! Period! Are Drill Instructors happy when a recruit washes out? No, of course not!

So, what is so ‘special’ about MCRD, and the personal sense of pride, anyway? And why do impressionable young people choose the Marine Corps?

There is a mystique about Marines. Ken joined because he wanted to be a Marine. I joined because I wanted to be a Marine – like my brother. The reasons for joining the Marine Corps are too numerous to even try to explain. But the bottom line is this: all who make it through to the end are transformed, mentally and physically, into United States Marines! Ask the parent of a new Marine, what they think of the transformation that has taken place, and the inevitable response will be something as simple as, “Wow!”

Each day at MCRD seemed like a re-incarnation of the previous day’s screaming and yelling from the frothing mouths of the DIs. There seemed to be no other rationale then the realization that we were continually treated like cr-p by those maniacs.

“As I said before,” Ken confessed, “there were many times when I wondered, but didn’t speak openly, of course; How could any normal human being treat other people so shabbily, so crappy? Prison would probably be better then this! Is there no dignity left in the world?” He laughed. “But, of course, the screaming, the shouting, the shoving and the absolute, iron-fisted discipline is just a part of the program. And of course, it works!”

“Anyway, through it all, graduation finally came in September! Ah, what a great day that was! Survival of the fittest really exists! Yeah, that was a really great day. I had survived! I had completed my course and survived!”