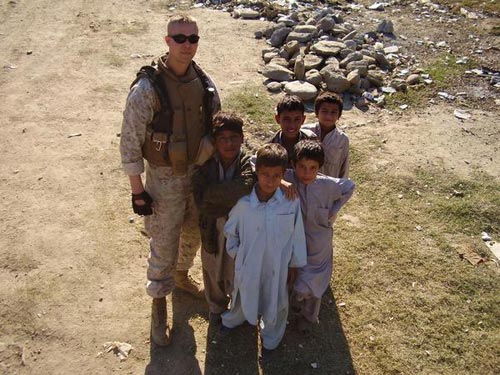 I was looking at your page and noticed the section you had about Afghanistan, and seen that MgySgt Holy had sent in some photos of him and some of the Marines there at Bagram. I had the pleasure of meeting MgySgt Holy and from the minute I met him I knew he was one of those old war dogs that led from the front. He came out to our FOB in Asadabad to visit and meet the Marines out there. While he was there he wanted to go out on one of our missions with our unit. When we were conducting the convoy brief and letting everyone know what vehicle and where they were going to be during the mission. The Master Gunny had a complaint about just ridding in the humvee, he told us "he was sure he could shoot better then anyone there and that he would be better off manning the 50cal instead of just riding in the damn humvee." I was there in 2005 and was injured by a ied blast. After I got hurt he made sure that while I was in Afghanistan that a Marine would be right beside me at all times incase I woke up that way I wouldnt be alone. He even kept my family up to date as to when I would be getting back state side, and has kept in contact with me ever since. I attached a picture of me receiving my  Purple Heart from General Hagee and a couple other ones.