Toughest On The Drill Field 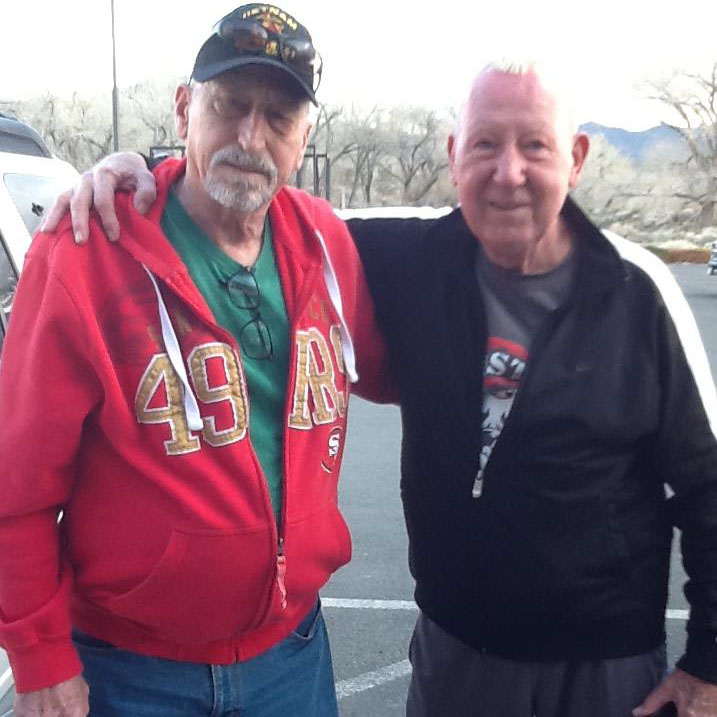 I find it somewhat amusing and ironic that there would be a story on Cpl. JL Stelling from 1964. I enjoyed that story but would like to add a new story to it.

I made contact with JL through the Sgt. Grit website. It was great to be able to correspond with him, as well as talk on the phone. Just for grins I asked him when he planned on coming up my way, to Dayton, Nevada. Believe it or not, he was planning a trip to Northern California to visit an uncle. I asked if he would come my way to visit, and he said yes! Needless to say, I was blown away that we would be able to get together after 49 years! Well, the visit happened, and it was a most memorable time for me.

Anyone who had JL as a DI knows I speak the truth when I say he was the toughest on the drill field. Honor platoons and good Marines were the result of that toughness. My wife even commented that there was a presence about him. I was lucky to have him as a DI. I feel luckier yet to see him again and thank him for what he gave me.

I included a picture my wife took. We had just finished breakfast at the Gold Dust Saloon in Dayton. JL left from there to return home.

Thanks to Sgt. Grit for the website that made it all possible.

I sure would love to get in contact with our Senior DI Sgt Sauer, and Juniors Sgt’s Smith and Olson from Plt 2016, MCRD San Diego from 1 Feb to 20 Apr, 1984. Can someone help me?

Thank you for your kind words, SSGT Parmenter .I was the author of the stories about Cpl J.L.Stelling .I can still see him walking down the short Company Street , He walked ramrod straight and he had a habit of reaching behind his back to check if his shirt pleats were equal and perfect. .My testing scores were 4.9 (98%)But I was only “Platoon Guide”for 15 minutes .Cpl Stelling ordered us to shine the souls of our field boots.I made a face and said “what”.Our new “Platoon Guide” was a graduate from Texas A&M. William Mike He went straight to the”President’s Own Band” in Washington D,C..I always traveled in the best of company .Through Cpl.Stelling’s efforts, we were “Honor Platoon”.Every Marine believes his DI was the “Best “.You and I know better .God Bless J.L.Stelling “Builder of Marines”

One of the two most significant men to have ever crossed my path (both Marines- one a retired Major and aviator) was the Senior DI who took me through boot camp at MCRD San Diego in late 1959/early 1960, S/Sgt. M. C. Short. Although I was “in and out” of our Corps after Korea and before Vietnam the example of leadership he set, the standards he required, his indomitable toughness and unwillingness to accept anything but our best (our = Platoon 288) were lessons of a lifetime. I can’t count the number of times he bellowed at us, “There is nothing Marines can’t accomplish if it doesn’t matter who gets the credit.” What extraordinary civilian applications that concept has! When I had triple bypass surgery and experienced post-op complications of bilateral pulmonary emboli in 2002, while in the ICU on a ventilator wondering if I would live through the experience, I realized that if I escaped that threat there were people I had to find to thank for their contributions to my life and also some apologies that had to be made. At the top of my list was S/Sgt. Short. It took almost 2 1/2 years but in too long a story for here I found his family in Ohio and learned that he had passed away about the time I was in the hospital in 2002. I had a number of telephone conversations with his widow, Mary, over the years and every November 10th until she passed away in 2012 she received a dozen roses and a note reminding her of the incredible value her husband’s life had to the Marines he trained. Now, semi-retired after a wonderful career culminating in almost 18 years on the Superior Court bench in my county here in California I give thanks every day for the good fortune of having had S/Sgt. Short cross my pass in 1959. None of the success I’ve had in my life would have been possible absent the lessons learned from one extraordinary Marine Corps DI so many years ago. And yes, I found everyone on my list… Thanks have been given and apologies made and, remarkably, accepted. Life is now about keeping those books balanced. Yet another lesson from 1959.

I was in Platoon 275, at Dago in August to Nov 1965 with the most memorable and BEST Drill Instructor, Sgt Stelling, doing his magic with our training. Of course we were Honor Platoon! Of course we won EVERY ribbon (except for religion) for our guideon flag! Sgt Stelling put each and every one of us to the ultimate test that prepared us for war. In fact, I would have loved to see him explain to that sniveling female congresswoman, Patsy Schroeder, why a punch in the gut and a kick in the butt saves lives and gets Marines to go beyond their 5th or 6th “wind” and understand that their body can take them further than their brain when its ready to acquiesce to quitting and giving up. She was the enemy of the Corps and Sgt Stelling was the guardian and savior of the Corps. I made Sgt in 21 months and gave up flying jets as well as Marine Security Guard school to get out and go to med school. Well, I competed with all those brilliant rich intellectuals who went to med school to avoid Vietnam and I ultimately got in and have just about ended a career as a family practitioner for 21 years and an emergency physician for the past 18 years. Sgt Stelling was very tough and he prepared his recruits for war and to be ready to accomplish whatever was expected of a Marine…..and that carried over into the slimy civilian world. Very Proud to have been in Platoon 275 under Sgt Stelling. Charles J. Neilson MD, RVN, 7th MTBn, Feb66-Mar67

SSgt J.L. Stelling was my Platoon Commander in 1968. After the first two weeks living in tents, we were the first platoon to be welcomed to the new High rise barracks in San Diego. SSgt J.L. Stelling introduced himself from the top floor while we were outside washing our clothes. From that point on Boot Camp became a whole lot more interesting. He was bad, tough, and scared the sh-t out of everyone. The other two D.I’s were p-ssies. SSgt Stelling demanded perfection in everything we did. As a platoon we won every streamer except the two PT streamers. Believe me it was hell to pay to the bitter end for not winning them all. Graduating as Honor Platoon we still weren’t good enough to eat with a fork or knife, nor was the smoking lamp lit before we boarded the Busses for Camp Pendleton. He had us by the short hairs to the bitter end. I went from scared, to hating him, to total respect. Before leaving boot camp, I became salty and had developed a mental toughness that I have kept to this day thanks to SSgt Stelling. “There’s always that 10%, there is no excuse, and always do your last order first”. The civilian world hated these Stelling quotes which I live by. He is by far the toughest old bird I’ve ever had the privilege to have known. To this day I still don’t like eating with a spoon.
Platoon 2058, Aug-Oct 1968
RVN, A1/1, Jan-June 1969
PFC Franchot Duncan

R L Ermey was on the field during my second tour, I did not know him because he was in a different battalion but later he stated that it really worked wonders if a recruit got a punch to the gut and I concur.Hard PT and some maltreatment raises a recruits performance 100%. The problem was the tours were sometimes too long. I had noticed that when a DI goes over his two years he sometimes gets dangerous. Excessive maltreatment. I was one of those and it didn’t take that long during my second tour. If recruits thought you might be crazy enough to kill them, some believed it. I was on the Grinder teaching drill getting ready for the 3rd. week Drill Eval. A recruit made a stupid mistake, I didn’t know who might be behind me so I walked to him and put my index finger against his nose ready to chew him out and he passed out (Sgt Hogan, fresh from DI School started running to call an ambulance–Get back here I says before we all get into trouble). Later the recruit said he thought I would kill him. I always tried to make sure the recruits thought I was crazy but you have to have some funny things happen also to keep up the morale. During some some platoons, I would put on an old set of Tropicals and wade into the shower with them and demonstrate to some idiot how to scrub under his arms with a bar of soap. And, make sure you scrub the dingle berries off your rear end. During the end of my second tour, during the 7th week, just before graduation at the 8th week. I was holding mail call– a 2nd Lt Officer of the Day listened through the open door of the new 3 story barracks. When I called a young man’s name, he came running forward and I told him that this envelope smelled like perfume and was he in love with me or was it his girl friend? Everyone chuckled. The OOD called me to the door and told me that I should not be joking with recruits and being so familiar with them (if he only knew). He said he would not report me to my company commander but that he really should. I felt like telling him to go ahead but being respectful, I did not. The company commander would have embarrassed him. He already knew what I was like and hid whenever I was teaching anything so he wouldn’t be involved.

My DI was Capt. JL Stelling, Platoon 278, 1964, MCRD; at least that’s how my yearbook lists him, so that’s what its going to be. At the time I didn’t know the difference between two stripes on a sleeve versus two bars on a collar, but I sure could tell the difference between a two-bit boot and a two stripe Marine. These comments won’t allow new paragraphs (trying to keep things short and sweet, I suspect), so I’ll keep it short. Jim turned my life around primarily by persuading me that seeing things his way was much preferable to any of the alternatives. Thanks again Jim.

I have to agree with all the comments about JL Stelling. He was my DI/Platoon Commander in 1969, Platoon 2004. He left a lasting positive impression on me that has remained all these years. Especially the military alignment and having things squared away. I often imitate him with my 5 grandkids when I put them in roll call formation and they like it! Corporal Darrel W. Eggemeyer

SSGT Stelling was so touch – he would eat the boogers off a dead man and ask for seconds. Semper Fi Cpl Joe L.Reyna